Because my current ministry lacks a building, the local Episcopal church has generously allowed me to use a desk in a corner of their office bullpen.  I keep their deacon/office administrator company while I tend to my various college-ministry-office tasks, and she holds down the fort. It’s a good arrangement. 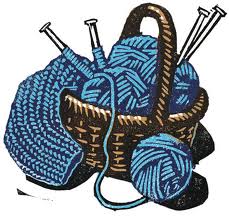 Last week, a young boy, “Zach”,* stopped by on his weekly rounds to pick up our recycling.  He is around 10 years old, and comes by every week to pick up our glass for us, for pocket money.  He doesn’t go to church, but our deacon has been working on him long and hard about this matter for over a year now.
This week, he stopped in the office with his mom, because he came to the conclusion that his father would greatly appreciate a hand-knitted washcloth for Christmas, and he was just the person to provide him with one.  Accordingly, he stopped in to procure knitting instructions from our deacon, “Beth”.
Beth whipped out the needles and yarn, and got right to it.  I scooted over on my chair to observe, since I am great at knitting, but bad at teaching it.  Within 15 minutes, Zach had a serviceable beginning to a washcloth, and was fixated on the second row, like it held the secret to Mideast peace.  “Now, Zach,” said Beth, “you really should come to our youth group here next week.  I think you’d like it.”
Zach was undissuaded from the knitting. “Why would I want to do that?” he replied calmly. “I’m not a Christian”  He announced this in a matter-of-fact, descriptive tone, like he had told us that he did not care for broccoli, or that magenta clashed with orange.  Facts were facts, ma’am.  Neither good, nor bad.
I found this fascinating. “Huh. So, what do you think makes a person a Christian, Zach?”
With this, he dropped the knitting, swiveled in his chair, and stared at me, jaw dropped. “Well, I don’t know.  Lots of things! But I’m not one.”
After some more gentle pressing, he started to list things he did not believe in: God was not stuck in the sky on a throne.  God was not an old white man with a beard.  God did not control us all like puppets.
He was surprised when Beth and I agreed with him on these points, but not slowed down.  Once he got going, he was on a roll–a 30 minute roll.  Why, if Jesus died on a cross, did we now all wear crosses around our necks as the sign of Jesus?  Why, if God gave us free will, did God insist that we worship him, and “not just let us sit on a beach in Miami all the time?” (That made me laugh out loud.)
To the last, I admitted that it remained a deep mystery, but for me, personally, I worshipped God because I actually like God.  Chances are, if I didn’t love God so much, I would ignore God a lot more.  But, moreover, I show God my affection by trying to live the way Jesus lived, and by trying to love the people around me as much as God did.  Zach pondered this concept for a while, knitting industriously.
“Well,” he finally said, “I’ll probably come to the youth group thing.  So long as I can ask more questions.”
We assured him that would be fine.  In fact, I told him that would be awesome, since his questions were among the best I had heard.  I meant it.
I don’t know what would happen, if we all took to the streets, sat on corners, and offered to teach whatever it was that we knew best to passers-by: be it knitting, cooking, basketball, singing, or hopscotch.  I don’t know what would happened if we went, offered what we had, and then listened to what people had to say about God.
But I have a feeling it would be amazing.
*I’ve changed the names, to allow for the possibility that other people don’t enjoy being featured on the internet as much as I do.

Posted in Thoughts and tagged adventures in postmodernism, ministry, Thoughts. Bookmark the permalink.

Episcopal priest, writer, wearer of fancy shoes.
View all posts by megancastellan »
← Yorktown, 2012: or On Women Bishops
Attack of the Spin →

This site uses Akismet to reduce spam. Learn how your comment data is processed.