We do not presume

As it is summertime again, that means more supply work for me, and more travels throughout Arizona. (It also means freshmen orientation time. But more about that later.)

This morning, I went out to Williams, on the edge of the Grand Canyon, to preach at a teeny Episcopal/Lutheran combo church. Williams is the next town over, about an hour west of Flagstaff, on Rt 66. (Think of the Pixar movie Cars–That’s Williams.)
To recommend it, Williams has: a train to the Canyon, and a wildlife park called Bearizona, which should win some award for Most On-The-Nose-Name for a Wildlife Park.
The congregation in Williams is friendly and decidedly western. The crucifer has dubbed me ‘the Virginian’, and addresses me as such. I told her that whenever I’m with them, I feel like I’ve wandered into a John Wayne picture. She told me, straight-faced, “Well, yup, that’s pretty much the point.”

Ah, the life of a traveling preacher. 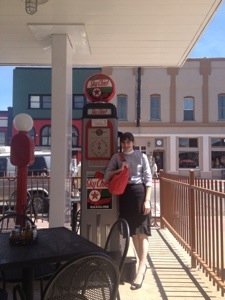 Me, by old timey gas pump in Williams. All the Rt 66 nostalgia you can shake a stick at.

This is my sermon:

In the old form of the Eucharist, there was this prayer we all said, right before we received the bread and wine.
the prayer begins, very properly “We do not presume to come to this, thy table, O merciful Lord, trusting in our own righteousness, but in thy manifold and great mercies.”

Great, right? For a moment, all across the Anglican Communion, no matter where you were, what sort or condition of person you might be, from Africa to India to Palestine, to the Deep South, to the edge of the Grand Canyon–when you got to this prayer, everyone suddenly sounded like they had been lifted bodily into Downton Abbey. We do not presume. We have all invited the Almighty over for a lovely spot of tea.

It’s a key difference between liturgical prayers and more, shoot from the hip, evangelical style prayers, but when you read a prayer from the prayer book, or from the Lutheran Book of Worship, the majority of the prayer is taken up, not with our requests for stuff, or our thanking God for what we’ve received, but the majority of the prayer is set up like this one is: we tell God what we know about God. “Dear God, here is what we know about you so far. And therefore, would you please do…..thus-and-such”

So basically, each time we pray, we sketch out the basics of our relationship to God. Who God is to us. Is God generous? Is God stingy? Are we comfortable with God? Do we trust him? Are we afraid of God? Do we love God? Prayer says a lot.

And we would recite it every week: we do not presume to come to this thy table! But thou art the same Lord whose property is always to have mercy, the prayer continues.

We didn’t invent this. We borrowed this method of prayer from our Jewish brothers and sisters, who raised this style of prayer into an art form. In Jewish liturgy, everything that is done requires a prayer, a blessing, and blessings always go the same way: Blessed are you, Lord God of the Universe, who has sanctified us with your commandments, and commanded us to light candles…or–who has given us the grain from the earth. Or–who has given us the fruit of the vine.

You recount past experiences of God because this is what your relationship is built on– to establish and build trust. Just the same as you would do with any human relationship.

Which is part of what’s happening in the gospel story. Jesus has moved into Capernaum, which will become his base of operations for his ministry in Galilee. And he is approached about the troubles of a local centurion and his slave.

Now a couple things are happening here– the centurion has heard enough about Jesus that he believes he can heal his slave, so he has come to trust him.
But also, the local Jewish population has learned enough about the Roman centurion that they trust his good intentions, and they are willing to take his case to the young rabbi Jesus, who’s just wandered into town. And they tell Jesus so: “He’s a good guy! Really! He’s not like the rest of those roman soldiers, he built our synagogue for us! This one we like. Totally fine for you to heal his slave.”

So Jesus heads off to his house, but before he can get there, the centurion sends word to him and stops him. He basically says, “Look, I know you would come, but I also know you don’t really have to. Just say the word, and my slave will be healed.”

In other words, we do not presume to come to this thy table. But thou art the same Lord whose property is always to have mercy.

Whatever it was, the centurion tells Jesus to stop, to not bother with coming inside his house. Because in that time, and that culture, there is a chasm between Roman soldiers and Palestinian rabbis. It was a big deal. And the centurion doesn’t presume to make Jesus cross that gap.

But he does have faith, immense faith, that even across these boundaries of culture and religious practice, and occupation and politics, that he knows are there, Jesus will still heal his slave. This is what amazes Jesus.

It’s an interesting mix of absolute humility and absolute trust. The centurion isn’t Jewish, so unlike the crowds that come to Jesus, he didn’t grow up reciting God’s marvelous saving deeds every time he prayed. He may have built that synagogue, but in a very real way, he stood outside of that community of prayer.

And yet, something reassured him that despite all. that, Jesus would help him. He didn’t presume anything, he didn’t guess anything, or assume anything, but he knew exactly who Jesus was, and what he was about. Jesus was shocked because here was faith in the most unexpected place.

It’s a leap of faith. It’s that thing that philosophers talk about. For as much as we, in church, recount the reasons to have faith in God, all those very reasonable reasons to believe in God and have faith, and to trust, the lists we make of God’s saving events …what it ultimately comes down to is that leap. That moment or series of moments when God becomes God to you.

And this doesn’t happen just all at once–Bam! Something happens, now everything’s clear and you believe everything forever. For most of us, it’s a process. We gradually meet God more and more, again and again in a series of moments over the course of our lives. It’s a series of little leaps, each one bridging these gaps.

And it’s a miracle each time it occurs, mainly because we really can’t control it. God appears to the centurion, God appears to Gentiles before the church was ready. God shows up where we least expect, making those jumps. At a soup kitchen, in the face of that annoying person next to us, in the worst moment of our life. Yet God always shows up. God, throughout history, does a splendid job of running his own PR campaign, and we do a pretty awful job.

All of our reasons and all of our best guesses cannot force God to show up. And yet God always does. Still working out miracles for the healing of the world.

So hopefully, if we learn one thing in this journey of faith, we learn not to presume. Because, we know that the property of The Lord is still always to have mercy. And always to show up, in the end.

And so long as We still have faith in that, then that is the miracle.

This site uses Akismet to reduce spam. Learn how your comment data is processed.